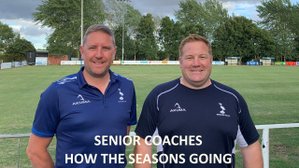 “We’re getting better every week”!

Through no fault of our own, we were one game short in pre-season and as such were not fully up to speed for our first league game away at Matlock. This was a shame as we had targeted it as a game that we should aim to win.

We were much better for our first home game the following week against Nuneaton OE only to lose to a disappointing penalty try on the last play of the game. Having lost our starting front row during pre-season, the scrum was always going to be difficult for us in those early games and so it proved the following week, losing by 1 point away to Oadby Wyggs and their powerful scrum.

Our scrummaging issues are now behind us and our expansive way of playing has seen us climb the league and really start to gather momentum. Our outside backs have scored a lot of tries and our attacking shape has really started to pay dividends. Nearly half the tries scored have come from the 2 wingers (14 out of 31). We had concerns about the physicality of the higher league and whether our young squad would cope. Defensively we are now much more robust and the squad is maturing together and becoming much more resilient.

This is highlighted by our disappointment at only getting a draw away at Melbourne when the win was only minutes away and narrowly losing to Long Eaton. As we currently stand, we lie in 8th position but have beaten the top 2 teams in the league and drawn with 3rd. We are really excited about where this group can go in the coming months and years.

We have been successful in integrating new players to the club, into the senior squad and of the 35 players that have turned out for the 1st xv so far, 5 are completely new and perhaps equally pleasing, another 5 are returning players. We feel that we have a Club and a coaching environment that players want to be part of.

We continue to make good use of the video analysis of every 1st xv game and this is proving to be invaluable for group analysis sessions, one on one development of individual players and the ability for players to watch games back in their own time.

Starting with a winning home tie against local rivals Paviors under Friday Night Lights was a great way to kick off the 2nd xv competing in the league structure for the first time at Level 9. As with the 1st xv, it was largely a step into the unknown. It’s quite evident that being in the league has really focussed the minds of the 2nd xv and given a lot of competition to the 1st xv. Players in the 1st xv know that if they under-perform, then there are guys chomping at the bit to replace them. Training numbers have been consistently good which has enabled us, together with Richard Byrom and Ben Wells, to bring a real consistency to selection that has not always been possible.

After 9 games we sit 3rd in the league, on equal points with 2nd placed Southwell. With a couple of isolated exceptions our standards have been extremely high and a willingness to play an expansive game has delivered the results. No better illustration of this was last Saturday when the wingers shared 7 tries between them and one of them was on his debut!

Being able to get a 3rd xv regularly has particularly pleased us and they, in turn, have also had some impressive results. Having had 5 fixtures already is great news and again demonstrates the strength in playing numbers that we currently have. It would be great to see even more players at training and we hope that players will continue to develop their skills in a supportive environment.