First team lose out in see-saw battle of 11 tries

Newark will take great consolation from this performance

Newark lost out at the death for the second week running, this time in a cracker of a match at Oadby Wyggs, the Leicester team running out winners by six tries to five.

However, Scott could not land the conversion of Newark’s final try which would have brought victory.
Below Alan Swain reports from Oval Park, the joint home of Wyggs and the training ground for Leicester Tigers.

Newark lost an early scrum and then lost their own line-out for Oadby Wyggs (OW) to register their first try, converted to make it 7-0.
Newark countered strongly and were awarded a penalty that Alex Scott converted well- 7-3

Newark were playing well in broken play and after a good charge by Captain for the day, Sean Denning, Scott darted over and converted his own try. 7-10

OW lost their prop to a yellow card and Newark secured excellent lineout possession with a training ground move resulting in an excellent try from winger Josh Ashe, converted again by Scott. 7-17

OW, with a heavier pack were dominating the set pieces and from a driving lineout made in 14-17.

Centre Kent Birch, who had been defending aggressively, was forced to go off with a shoulder injury.

Newark started strongly after the break but were unfortunate to lose Kash Bagga with an injury. However, after a couple of strong runs by Denning, the ball was moved wide for Ashe to register his second try. 26-24

However, Newark continued with their attacking intent, resulting in Ashe’s third try, duly converted by Scott. 33-31

With only 15 mins left, the match was closely poised. OW were ominous up-front, but Newark looked increasingly dangerous with ball in-hand.

OW pounced next to make it 40-31 but Newark were not finished. A penalty by Scott made in 40-34 with a few mins remaining.

After an excellent counter attack, Scott made an incisive line break to release Scott Edmed who did well to touch down in the corner. Score 40-39. Unfortunately, Scott was unable to make the difficult conversion to win the match. Newark will take great consolation from this performance in advance of their home match next week- all welcome.

The match was very well refereed and OW’s and their supporters were excellent hosts. We look forward to welcoming them back to Newark in December. 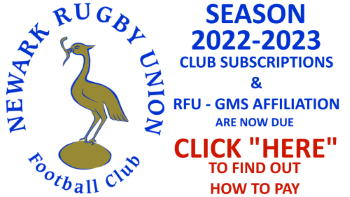