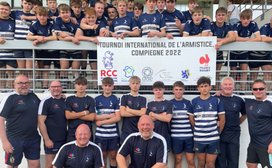 In a re-run of last year's NLD Cup final, Newark welcomed Sleaford back to Kelham Road on a sunny morning with a distinctive chill in the air.

With sickness and lifts causing a few last-minute drop-outs Newark were buoyed by the surprise appearance of Luke F and his family, who tragically and totally unexpectedly lost his mother on Wednesday morning.

Sleaford had their own problems with 5 match day drop-outs necessitating the match commenced with 14 a-side, uncontested scrums and Newark not being sure if this was to their advantage, especially when they started with a Forward in the Backs for the first time!

Newark began playing into the wind and with Luke captaining the team for the first-time he immediately began leading by example with some powerful runs down the middle of the pitch. But with each side having one less player on the pitch it created that bit more space for the speedy Sleaford backs to run in and it wasn’t long before some sloppy Newark tackling allowed that speed to show as Sleaford scored their first try and conversion 0-7.

Newark hit straight back and cheered on by his Father and Sister from the side-lines Luke F scored a Captains try in the corner, but immediately gave another soft try away by falling for the same side steps and dummies by the Sleaford backs that led to their first try.

With the scores now 5-14, Newark began to wake up to the realisation that Sleaford were out for revenge after their cup final defeat. With a huge advantage in terms of size and weight the Newark forwards were totally dominant through the middle of the park and when the Captain powered through again to grab his brace the conversion from James H closing the gap to 12-14.

But Newark still hadn’t learnt the lesson of ‘look at the legs not the hands’ from the first two tries and missed tackles led to the third try for the Sleaford Backs and when converted their two-score lead was restored at 12-21.

The half ended with yet another try for the rampaging Newark Forwards which when converted by James H took the half-time score to 19-21.

With Sleaford smelling victory, the half-time chat was all about playing to our strengths and avoiding theirs by keeping the ball in hand and upping the ante in our support play by dominating the rucks.

To say that Newark team executed the 2nd half game plan to perfection is an understatement. In a display of power and precision they outscored Sleaford by 7 tries to 1 in the second half by simply exploiting that most basic of rugby strategies: getting big players to run against smaller players and then support them and support they did with all the team playing their part.

Sleaford tried to respond but with the improvement in tackling matching that of the support play, Newark kept them down to a solitary try.

The final score was 62-26, with Captain Luke scoring a magnificent 5 tries which capped a personal performance that his late mother would have been so, so proud of – our thoughts are with you all at this most difficult of times.